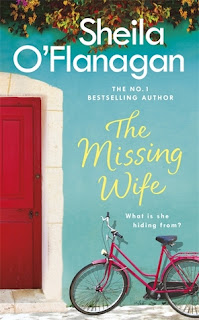 After being left disappointed with "If You Were Me", my choice of "The Missing Wife" was rather reluctant. I went ahead with this book, more so to see if Sheila O'Fla﻿nagan is definitely  "not my type" of a writer. Having said that, after reading quite a few reviews and skimming through the synopsis of the book, I kept hoping that it might be a bit of light-hearted read that I would enjoy... and it was! I did enjoy this book.
So... Here we have Imogen and Vince - you typical suburban couple. They have good jobs, nice house in a nice area, they are planning to have a baby soon.... Imogen had spent several years growing up in France, after her dad had died in a car crash. She loved France, she loved her little settled life there... But then things changed and first Imogene got uprooted and returned with her mom to Ireland. A few steps down the road and Imogen's life shattered again, when her mother dies from cancer...
Still lucky to have her step dad and a step sister, Imogen is on the move again. This time to England, where her step dad decides to go.

That's why when Imogen grew up, she craved nothing more than her own family, settled and nice.

Vince became her rock. He is always looking out for Imogen, always protects her and makes sure she does the right things. He loves her and cares for her. He always worries about her.

And what does Imogen do? She hoes on a business trip. And does not return. She goes hiding from her husband.
Why?!! Is she mad? Is there another man? Is she just silly and irresponsible cow?
Not as simple. But no, Imogen is not mad. And she has her reasons to act the way she does...

Will Imogen ever be settled and happy? Will she return to Vince?
Will they have a little nice family of their own?...

What I loved about this book, was that it's quite simple and as close to real life as it gets. Yes, of course it has its parts of "mix and match" events that happen in a perfect way in a perfect world, but in its core, in its message to the reader, the narrative is quite direct.


All the little clichés that Imogen's mom used to say - I loved them! Yes, they are clichés but they are true. You can't argue with them :-)

And that raw childhood desire of settled, happy life, where you feel safe and secure and warm... that desire to build that little bubble around your own life and have it for ever...
It is also a book about being brave. Brave enough to see your own mistakes and brave enough to face the choices, to make those choices. We all, at some point question certain appearances.
Sometimes it's easier, more convenient to pretend that what appears to be good is really good...
O'Flanagan manage to add just the right amount of everything to this mix: a bit of romance, a bit of drama, a bit of an adventure even, a bit of psychological tension and splatter of real life problems.
The characters are well written. They might not have the detailed accuracy of a portrait, but they give you enough to feel their fears, their anticipations, their desires, their desperation at times.
It is also an encouraging book.
It shows that you don't need to be a superhero to change your life.
at June 12, 2017